In a bewildering world, it is the critical insights that empower you. Life has given me a few insights to share. I’m a teacher, not a prophet.

I’ve had a career in applied physics, not that I planned it that way. I intended to be a college professor, a professor with devotion to that bottom-level physics course that is often a graduation requirement for humanities majors. In the late 1960’s, however, the universities were in turmoil, so I went to the national laboratory at Los Alamos, a place in the mountains where my kids could play in green canyons rather than the sooty cement alleys of a city. I’ve worked professionally on liquid helium, weapon theory, solar buildings, heat transfer, and remediation of polluted ground, and I’m grateful for the experiences. To be meaningful, life must be experienced rather than watched. The person who gathers many experiences has lived life as well as possible within the circumstances, whether or not those experiences were pleasant. 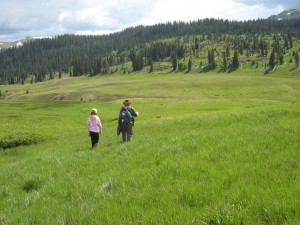 Don Neeper and a granddaughter walk at Elwood Pass, Colorado.

Throughout four decades, I’ve served as a voluntary technical advocate for scientifically reasoned restriction of pollution. Technical logic is sometimes suppressed by money, more often by fear of regulation.  I’m working on stories of those encounters, so a few personal tales might appear among these pages.  I don’t imply that there’s no fun in all this, because the people involved are always amusing characters performing on their own stages.  However, the colorful stories are better told with books of fiction than with the short blogs and essays offered here.  My resume is below and at https://neeper.net/resume/ .

Find me on LinkedIn

SOCIAL ISSUES, ENVIRONMENT, and ENERGY as related by APPLIED PHYSICS

2001     Negotiated agreement with responsible party for abatement of large spill to groundwater.  Agreement immediately approved by the regulator.

2001-03  Appointed to board of STRONGER, funded by EPA to review regulations of oil-producing states.  Reviewed rules of New Mexico, Texas, and Indiana.

2009     Expert testimony in defense of chloride standards for pits.

2010–13 Industry-state work group to develop new pit rule.  Expert testimony and  cross-examination in two hearings each of which ran for two weeks.

Heat transfer and fluid flow: conducted experimental simulation of a graphite fire in a nuclear reactor; designed other gas purge and cooling systems.

“Harmonic Analysis of Flow in Open Boreholes due to Barometric Pressure Cycles,” D. A. Neeper, Journal of Contaminant Hydrology 60, 135-162 (2003).

“Investigation of the Vadose Zone with Barometric Pressure Cycles,” D. A. Neeper, Journal of Contaminant Hydrology 54, 59-80 (2002).

“A Model of Oscillatory Transport in Granular Soils, with Application to Barometric Pumping and Earth Tides,” D. A. Neeper, Journal of Contaminant Hydrology 48, 237-252 (2001).

“Research and Development of Solar Ponds,” D. A. Neeper, Testimony for the U.S. House of Representatives, Committee on Science and Engineering, Subcommittee on Energy Development and Application, Washington DC, March 19, 1980. Published in the transcript of the hearing and as Los Alamos Scientific Laboratory internal document LA-UR-80-1018.