Scientists lobbying for funds?  No.
Concerned citizens protesting against lying. Official lying, corporate lying, political lying. Why is lying so widespread that it is the feature article of National Geographic? (June, 2017) 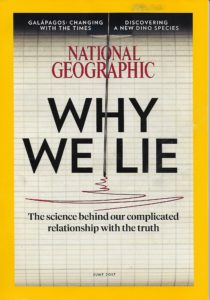 The march was a revolt against the politics by blue lies, the official rejection of expertise, the fashionable denial of factual information, and the cultural war on science

Rush Holt, a physicist with eight terms in the House of Representatives, observed that the U.S. responded with the 1958 education act after the Soviets launched the first earth satellite. That produced a lot of scientists and engineers but “left behind 80% of the population because we teach science in the schools primarily for future scientists.”

Science illiteracy is but one factor behind the denial of facts such as climate change. There is more going on.

National Geographic points out that when people accept lies, they want to hear whatever it is that they are hearing. People process information through a framework of beliefs and prejudices. The Geographic quotes linguist George Lakoff: “If a fact comes in that doesn’t fit into your frame, you’ll either not notice it, or ignore it, or ridicule it, … or attack it if it’s threatening.”

When belief is contrary to fact, the result is defense, not analysis.

So what can we do about that?

Lakoff says new information must be presented within a framework that we already understand. That’s why we often explain things using metaphors—as when a light bulb symbolizes a new idea.

Framing is the use of unconscious mental structures, roles, and relations between roles. For example, cartoons portray the subconscious image of scientists as people in white coats, playing games unrelated to the real world of jobs and paychecks. I’ve never seen a white coat in a physics research lab.

According to Lakoff, brain science reveals how framing connects to the emotional centers of the brain—to those parts that secrete dopamine, which in turn gives us good feelings. New language and new concepts must be introduced with emotion, with sufficient spread over the population, sufficient repetition, and sufficient trust in the messengers. Frames must be built over time.

Political campaigns do not offer that kind of time.

Concerning the politics, Lakoff says “conservatives have spent decades, day after day building up frames in people’s brains, and building a better communication system to get their ideas out in public. Progressives have not done that.” He describes the conservative moral system as regarding man above nature, with decision by the market as both natural and moral, making greed thereby good in a cost-benefit analysis. However, energy, food, health, and security are not amenable to cost/benefit arithmetic. The reality is that we are not separate from nature.

I’m naive enough to think that either conservatives or liberals could conduct a more reasoned approach to governance than lying. Neither the Tea-party type or the social-engineering type will do. We need explorers not steamrollers.

The civil rights movement had a coherent frame with moral values absent technical jargon. That could be done for policies without lies, but we need more than a march for science. The frame is larger than science.

First, we have to talk to each other.