In 1986 I was at a technical conference where an invited speaker was presenting data on a little-known project—measuring atmospheric CO2 concentrations, day after day, year after year. The terms “global warming” and “global climate change” weren’t used—they weren’t in the general vocabulary at that time. Nonetheless, I watched the data on the screen in growing horror. I suspect the other participants had the same feeling, but nobody said so. Humans were obviously altering entire the atmosphere without knowing what the effects would be. Pollution on a global scale.

Other people soon published words of alarm. Let me pull together the essential phrases from a sentence that ran to two pages of length:

“The General Assembly, …Concerned that certain human activities could change global climate patterns, … Endorses the action of the World Meteorological Organization and the United Nations Environment Programme in jointly establishing an Intergovernmental Panel on Climate Change …

(The General Assembly) Requests the Secretary-General of the World Meteorological Organization …immediately to initiate action leading, as soon as possible, to a comprehensive review and recommendations with respect to: (a) The state of knowledge of the science of climate and climatic change; (b) Programmes and studies on the social and economic impact of climate change, including global warming; …”  (accents mine)

The above is a United Nations resolution, December 6, 1988.

Human-caused climate change was apparent to the U.N. 25 years ago, but American politicians and industry are still arguing about whether it is real. The news media has posed global climate change as a scientific ‘uncertainty, or global warming due to greenhouse gases as a notion sponsored by alarmists. Carbon dioxide, produced by combustion of any fuel, is a strong greenhouse gas, acting to trap heat in the climate. The CO2 concentration in the atmosphere has increased 39% since pre-industrial times.

The red curve is the CO2 concentration, from the time the monitoring started in 1958 to the present. Notice the exquisite quality of the data. The wiggles are not random errors. They are regular, annual variations. That’s the planet breathing. During summer in the northern hemisphere, plants absorb CO2 at a greater rate, causing the curve to dip. The black curve has the wiggles taken out by an arithmetic averaging process. Notice that the black line curves upward. The CO2 is not only increasing, but increasing at a greater rate as time advances. This is called the “Keeling curve,” for the man who started monitoring the CO2 and carried it on for many years.

The second graph shows data for the recent four years to illustrate the precision of the data, showing that the wiggles are indeed not random changes or errors.

The third graph shows the annual rate of change of CO2.  Note the rate of increase is increasing. 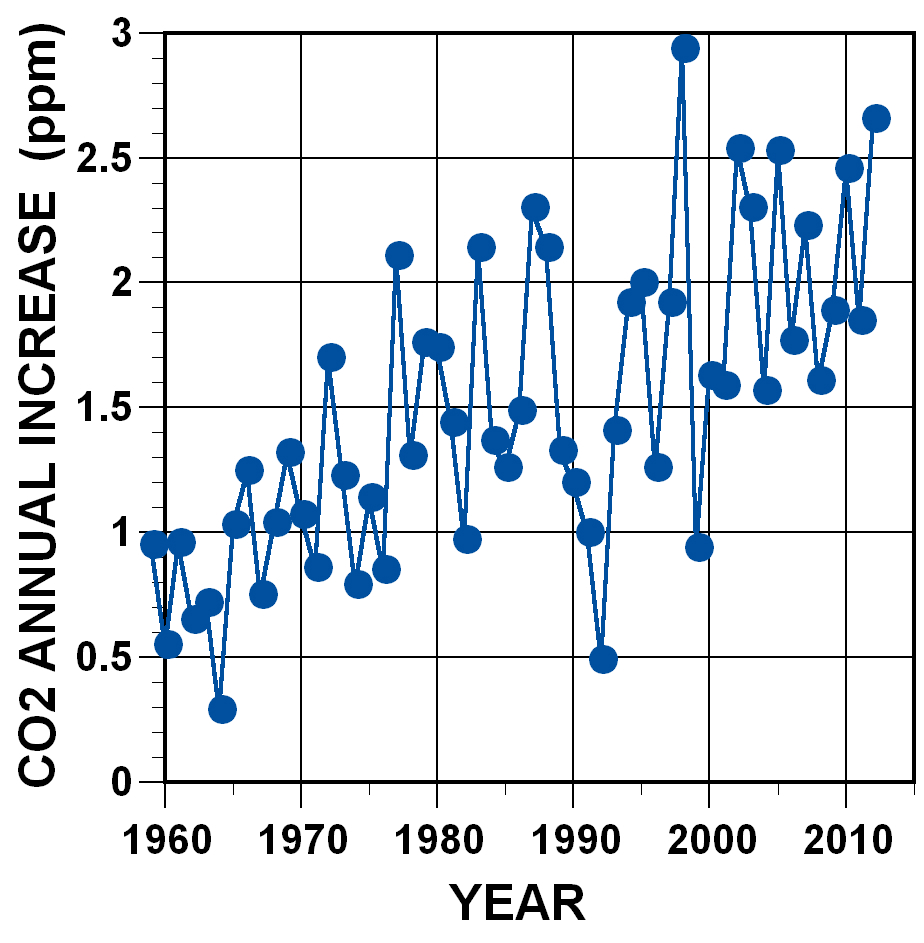 Politicians and fuel companies oppose action on climate change, enough to have stalled U.S. progress on CO2 emission standards; enough to prevent the U.S. from signing the Kyoto protocol on climate. In 2010, at least five states considered bills prohibiting action to restrict greenhouse gas emissions. For example, the Utah legislature opposed the climate-protection findings of the U.S. EPA because action to reduce CO2 would result in higher energy costs. And the same year the South Dakota legislature resolved that public schools teach global warming to be a theory not a fact, stating that astrological and cosmological dynamics affect weather. Astrology and cosmology affect the weather? Some legislatures suffer from that scientific illiteracy I mentioned in Blog 11,but at least six states have enacted climate-related legislation.

So does CO2 really cause warming?

Here’s a clip from the July 16, 2013 weekly news rag of the American Geophysical Union, the professional association of some 62,000 geophysicists, geologists, climatologists, oceanographers, meteorologists, and hydrologists, together with other earth and space scientists.  Send it to anyone who denies climate change!

“Decade of climate extremes.  The first decade of the 21st century was the warmest decade recorded since modern measurements began around 1850, according to a 3 July report by the World Meteorological Organization (WMO). In addition, a pronounced increase in the global temperature occurred over the 4 decades between 1971 and 2010. … The WMO report shows that global warming was significant from 1971 to 2010 and that the decadal rate of increase between 1991-2000 and 2001-2010 was unprecedented …”

Measurements say the climate is warming.  I wonder if certain lobbyists and legislators can read?  Cheap fuel today will make you very warm tomorrow. Probably also flooded and hungry.