This existential novella presents two parts of a life story and an unspoken questioning of life itself.  The story is related by—or seems to exist in the mind of—the narrator Tony Webster, now retired and living alone.  Until the present, Webster has lead an unremarkable life, so unremarkable that, after describing his undistinguished and unambitious youth in the first third of the book, he says little about it except that he had a wife and a child, with both of whom he is on good terms, although the wife long ago became an ex.

Now in his senior years, Webster recalls his school and college chums, and a youthful love affair in which his girlfriend rejected him although he didn’t care for her, either.  His jealousy subsequently emerged when the more intellectual of the chums took up with the girlfriend—and shortly later committed suicide. 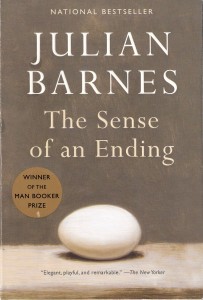 The second two-thirds of the book recounts the events and ruminations stimulated when, forty years later, an unexpected letter from a lawyer announces that the mother of that lost girlfriend has bequeathed him a little money and a diary, the diary of the intellectual chum who acquired the girl and then died of suicide.  The money is present, but the former girlfriend has absconded with the diary, and Webster must find her—and face her—to get it.

Webster ponders the sense of life lived or lost, feeling the need for his first lover and regret for his own juvenile jealousy turned to hatred.  Regret becomes remorse, something about which nothing can be done, something that can be relieved only by forgiveness.

Webster seeks advice from his ex-wife.  The reader, but not Webster, sees the reason why his humdrum approach to intimate sharing proved insufficient to hold the attention of a woman, even that of his grown daughter.  The story builds to a tense ending in which Webster sees the consequences of his and the others’ lives.  However, the great strength of the story is not in its plot—it’s in the author’s observations about life, expressed through Webster’s thoughts.  As Webster says, “When we’re young, everyone over the age of thirty looks middle-aged, everyone over fifty antique.  And time … confirms that we weren’t that wrong.”  “The less time there remains in your life, the less you want to waste it.”  Finding memory can’t be trusted, he says, “The witnesses to our lives decrease, and with them our essential corroboration.”  “I had wanted life not to bother me too much, and had succeeded …”  It’s a regretful rumination of a man who hadn’t tried anything great, and hadn’t failed in any obvious way.  Perhaps he doesn’t realize that ordinary people, doing very ordinary things, generate extraordinary events.  Or perhaps he didn’t generate them; did they just happen?  Does life just happen, and people and dramatic events happen along with it?

I recommend this book for anyone who has passed the age of fifty; better yet for those beyond their sixties.  For younger readers, it offers a valid, almost historical, insight.  For the mature reader, it offers a mural with which to reflect on your own life.  You must discern for yourself the questions it presents, for the author never asks them openly—or answers them, either.  Like a good artist, he simply paints a picture, leaving you to discover what it means.

Next week,  I’ll refer to this book when exploring a society-wide view of aging in America, a broad composite picture for comparison with Webster’s soliloquy.