Most of these blogs have talked about science, society, and complex systems.  Today, I offer a more personal story, a story that may, in the end, circle back to the big questions.

I was listening to the minister’s sermon about courage.  What is it and where does it come from?  He told the story of a Serbian man, caught in the Serbian-Croatian ethnic cleansing of the 1990’s. This one Serbian saved the lives of some hundred Croats held in a makeshift concentration camp.  He deliberately misidentified individuals as Serbs, thereby preventing their executions.  Was this man smarter, more educated than others, aware of philosophy and thereby capable of seeing beyond the immediate situation?  No, he later accurately self-identified as an uneducated lazy slob.  In the midst of carnage, his action was spontaneous, not the result of academic evaluation.  My thoughts drifted from the minister’s lesson into a haunting vision from my past.

In 1960, my wife and I were driving through the western portion of what was then communist Yugoslavia.  We were taking a shortcut from northern Italy to Austria.  We had no visas, and Yugoslavia did not welcome foreigners at its borders.  Nonetheless, we explained our plan at the border.  The fierce policewoman was less than sympathetic.  Our money and our borrowed Volkswagen bug were searched, and we drove on to Ljubljana, thereafter proceeding on unmarked dirt roads toward Bled.  No one spoke English, but an old man who spoke some German responded grudgingly to our questions about the route.  Ah, Germany had invaded this area during WWII.  With surgeon’s tape, we marked the back of the VW with a large letters: “U S A.” Better to be seen as lost American students than as returning Germans.

We arrived in Bled that evening, finding a fairyland town with a lighted white cathedral on an island in the center of the lake.  Relief.  The next day, we proceeded toward Ljubelj (Loibl) Pass in the Alps.  In the valley, adjacent to the dirt road, stood a black metal skeleton with a heart, raising its arms to the sky.  We stopped.  Surrounding foundations marked the spot as a concentration camp.  Dumbstruck, we found only enough information to associate the scene with Mauthausen and WWII.  We took this photo in that somber place. 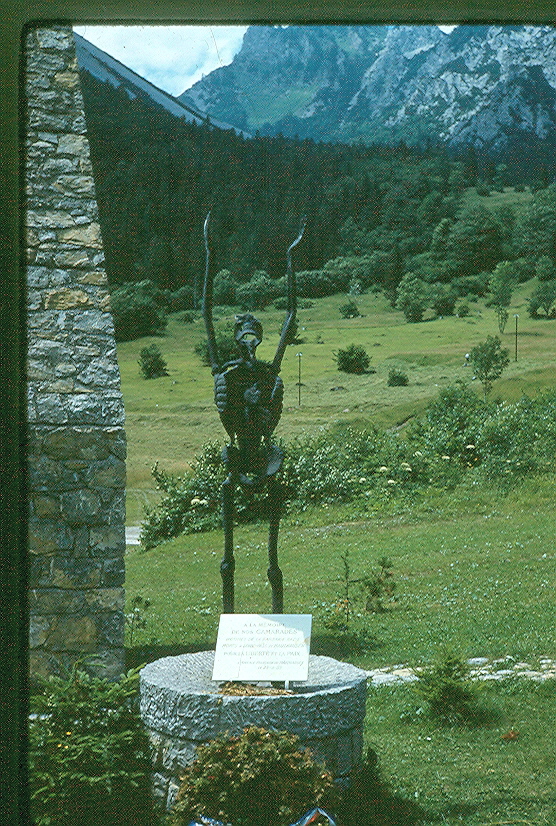 ——An hour later we were going up a marked 28% grade, the VW bug kicking rocks backwards from the tires.  Without the weight of a rear-mounted engine on the driving wheels, we wouldn’t have made it.  At the top of the pass, a cheery border guard welcomed us to Austria, first charging “ein steuer, nicht var, ein roadtax.”  We didn’t know if the “steuer” was for his pocket or for the government, but we felt such a relief we didn’t care.

A  Slovenia tourist web page and a museum page document that the Ljubelj camp held prisoners of various nationalities, mostly political prisoners, from Mauthausen.  These slaves, and those stationed at a similar camp on the other side of the pass, were forced to dig from each direction, making a tunnel under the pass to aid the movement of Nazi troops.  Our steep road was closed in 1967 and traffic goes through a tunnel—presumably, the one built by the tortured prisoners.  Reportedly, the pit crematory is still on display at the site.  A modern guide to visiting one hundred attractive sites in today’s Slovenia is available on the web.

Courage is acting when doing nothing would be more comfortable.  Just look around.  Is something wrong?  Is there a holocaust that is unmentionable?  Have you acted, have you spoken?