It’s time for a lighthearted story—but one with a purpose, of course.

Back in the 1940’s, when I was growing up in a San Luis Valley in southern Colorado, a retired forest ranger named Darley occasionally took me into some of his favorite haunts, where he seemed to have a personal tale about every tree, creek, or trail.  On this particular summer day, we were going up Rock Creek when he pointed to a set of dots in the bark of an aspen tree.

If you puncture or scrape the white powdery bark of an aspen, it forms a black, lumpy scar.  Long permanent black marks appear after a horny deer polishes his antlers against a young aspen in the fall.  Elk bite the bark during winter scarcity, leaving a pair of teeth marks.  Bears leave claw marks when climbing an aspen; I’ve seen little trees with bark that suggests mamma bear sent junior up the tree for baby-sitting.  But here was a set of individual lumpy scars, each scar about the size of a nickel or a quarter, arranged in a polka-dot circle about eight inches in diameter.  “That’s the autograph of Ball, the crazy prospector,” Darley explained.  I’ll repeat Darley’s words as best I can. 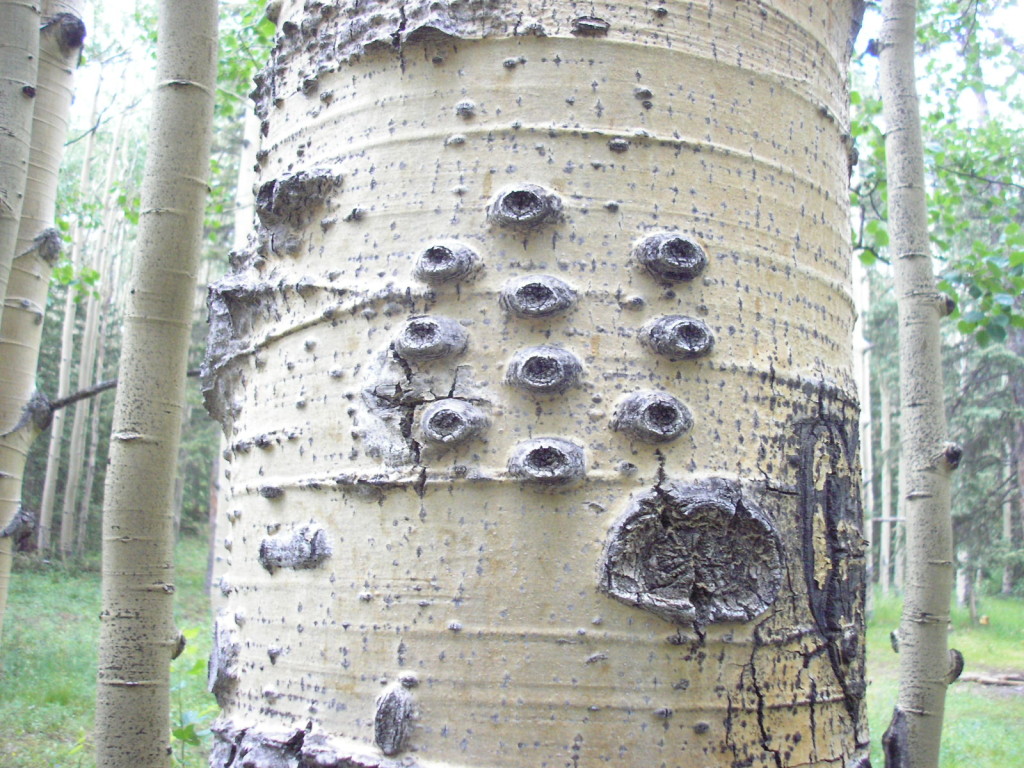 “I was up here one day when I met an old man, with his mule and gold pan, and the usual gear that prospectors carried.  I asked him who he was, and he said, ‘Just tell folks you met Ball, the crazy prospector.’  So, when I was back in town, I asked around.  Sure enough, I learned that Ball spent the winters in Alamosa where he would get folks to grubstake him, and then he would spend the next summer prospecting.

“Wherever he went, Ball would use his miner’s pick to make that round set of pokes in an aspen tree, leaving a permanent sign that he had been there.  You see this mark here, but there’s more on the trail up above where the Comstock camp ground is now.

“Well, one afternoon I was up here with another fellow, and we looked up the hill toward the afternoon sun.  We saw three smokes, so we took off uphill.  I came up onto the brow of the hill, and I saw two boots sticking up above a log against the setting sun.

“It seems Ball had taken sick, and set three little trees on fire, and then sat on that log.  He died there, and just fell over backwards.  We just buried him on the spot.”

Darly’s story stuck in the little boy who was listening.  When I returned to the southwest at age 31, I remembered Ball’s marks.  I took my family to Rock Creek, and sure enough, there by the road, I saw Ball’s signature on a tree.  More years later, with graying hair, I could not find that tree by the road, but on the trail above the Comstock I found several aspens bearing Ball’s trademark.

In my later years I wondered about Ball.  Why was Ball in the Rock Creek drainage?  As a child, I saw lots of old, dead mines around the Alamosa River, about ten miles over the ridge from Rock Creek, and bigger mines along the Conejos River, still farther south over another high ridge.  But Rock Creek?  No mines, no gold here.  Why did Ball spend his days, to his dying hour, here?

Then I asked myself, “Why am I here?”  I’m here for a camping trip, in the most beautiful canyon with aspens and little grassy meadows and beaver ponds with trout.  Ball was here, apparently for the same reason.  Each of us has only a limited number of hours to spend, and Ball chose to spend his on an extended camping trip in a divine garden.  He wasn’t trying to get rich; after all, most of those mines in the other canyons failed, leaving scars on the landscape that are healing only now, almost a century after the digging began.

One thought on “Blog 68. Ball, the Crazy Prospector”