The present temperature is not the key index to predicting the future climate any more than the current temperature in a cold room tells how warm it will be if you add insulation to the walls.  It’s knowing the insulation that’s important for prediction. Below is a drawing that explains earth’s energy budget—as affected by the insulation of the atmosphere— in one glance. 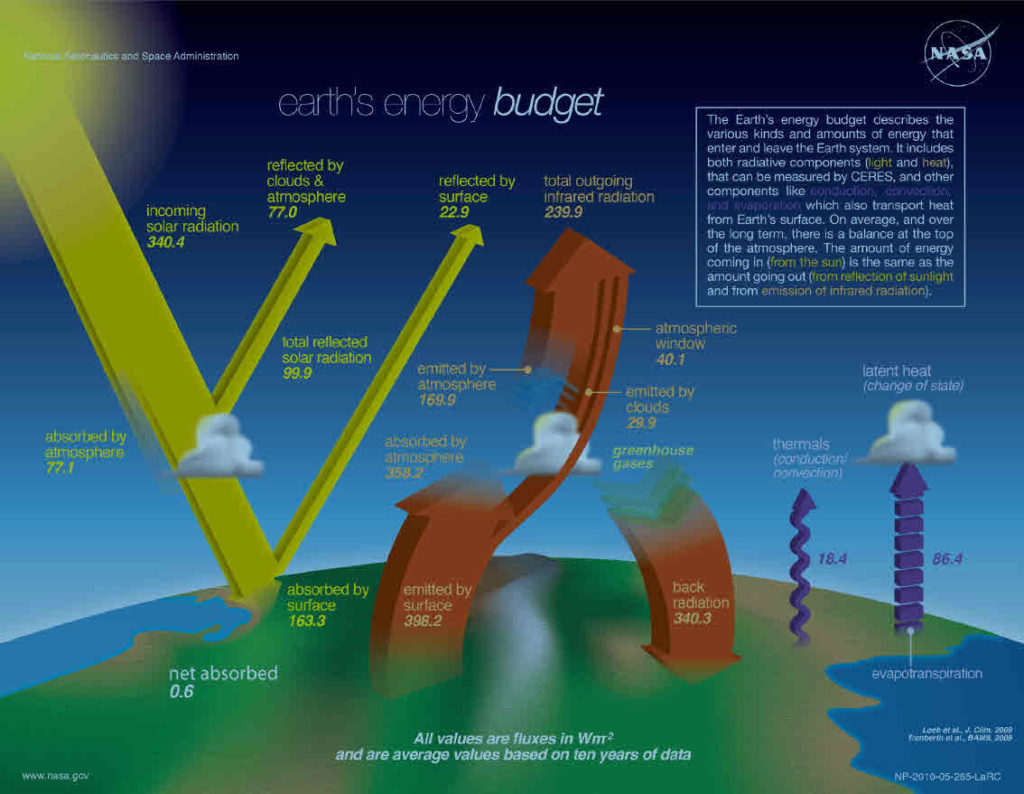 To understand this picture, think of a hot clothes iron sitting vertically (on its hind end).  If you touch it, you’ll be burned.  That’s conduction of heat.  If you hold your hand just a foot away from the hot surface of the iron, you’ll feel heat on the side of your hand that faces the iron.  That’s thermal radiation.  Everything radiates heat, you, and every wall, and even the surface of snow.  The warmer, the more radiation, so a net loss of heat can radiate from your body to cold walls.  That’s why we turn up the heat in the winter—using warmer air to make up comfort for heat our bodies lose to cold walls.

Now think of wrapping a blanket around that iron.  You’ve impeded the radiation, so the temperature must go up until the loss equals the energy deposited by electricity.  Global warming works that way, too.  Heat is radiated to earth’s surface by the sun, and can be lost only by radiating back to space.  Carbon dioxide (and methane) in the atmosphere reduce the clarity of the atmosphere to infrared thermal radiation.

In the picture, the sun shines on the top of earth’s atmosphere with an (average) intensity of 340.4 Watts per square meter.  The atmosphere reflects some, leaving 77.1 Watts absorbed by the atmosphere and 163.3 Watts absorbed by the average square meter of earth’s surface, for a total absorbed of 240.4 Watts absorbed.  Of this, about 239.9 can be emitted back to space, leaving a net absorption (if numbers are calculated to greater accuracy) of 0.6 Watts.  The earth has to warm up.  If more carbon is added to the atmosphere (like making a thicker blanket around that clothes iron),  the temperature must rise.  The predicted rise during the next century at least twice as much as during the last century..

And hence global warming.  Think of it every time your hand or face feels a nearby warm object.