Here’s a photo of a frosty holiday morning in California.  The frost illustrates the physics that determines the global climate.  And climate is but one of the current worries of scientific associations, who worry about a frosty government. 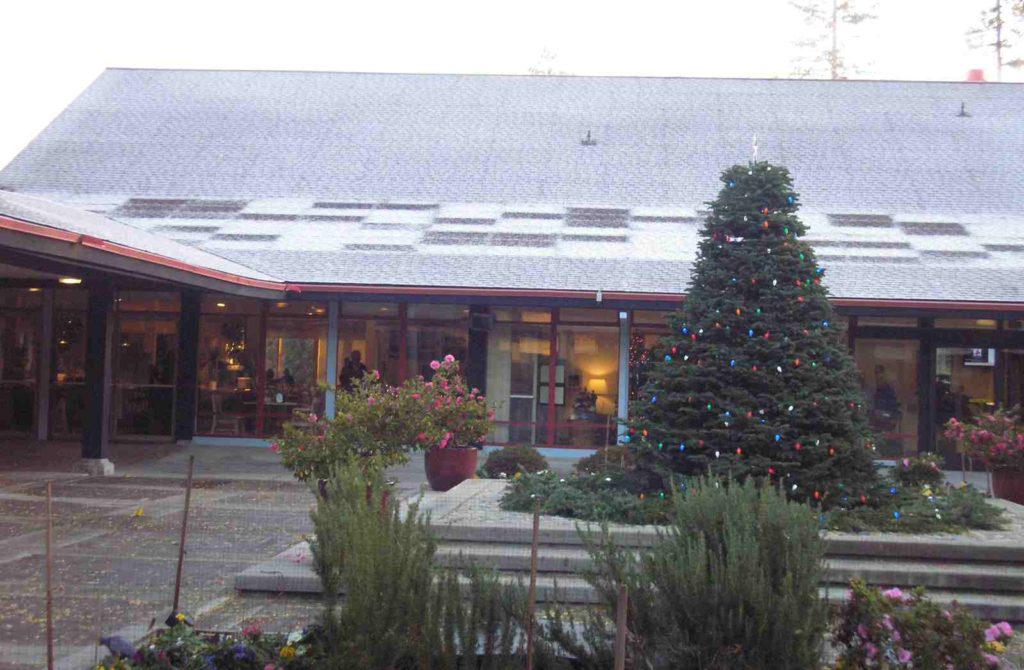 Behind the Christmas tree, the photo shows frost on the roof.  Note that there is no frost, or even moisture, on the ground or on the low-lying plants.  The roof has low mass and radiates heat to a clear night sky, so its temperature dips well below freezing while the air temperature remains well above 32 degrees F.  Note brown patches on the roof where the contractor apparently failed to install insulation, thereby keeping those patches warmer.  The ground has large mass, so it must cool for several sunless days before it’s temperature would go below freezing.

The frosty areas illustrate the only mechanism by which the earth can rid itself of the solar heating it receives each day.  The cooling occurs by radiation through the atmosphere to space.  If you impede that radiation by adding methane and carbon dioxide to the atmosphere, the global temperature must go up.  It will take a while for the heat to accumulate, but frosty mornings will be eliminated–along with arctic ice.

Political opposition to scientific facts, including vaccination and climate, has the scientific societies concerned.  In particular, the American Geophysical Union (63,000 members world-wide) and the American Physical Society (the physicists) are urging their members to reach out to inform the public about science.  This is foreign territory for scientists who might rather remain secluded in their laboratories.  If scientists venture out into schools and Rotary clubs and make other public appearances, it might appear as an organized political conspiracy.  (Other observers have said the scientists had a conspiracy about climate; however Trump said global warming was a Chinese hoax.)

Thus, the scientists go timidly into the public arena, fearing to be viewed as political conspirators, and also fearing what the Atlantic magazine describes as “a presidential administration hostile to climate science (that) also threatens to increase the skepticism that already exists in American political life.”  A Gallup poll finds that 65% of Americans blame rising temperatures on human activity, 84% among Democrats and 40% among Republicans.  Thus, if scientists develop any significant public presence, even if they talk only about science as I talked about frost above, they will be seen as political.  Climate is the biggest science topic of today, and it is also a political dividing line.  The dividing line has become more than political–it’s social, it’s cultural.  The division is between citizens, not scientists.  Scientists are in agreement, but scientists have no power.  There is no science party.  And only one scientist in Congress.

What’s a citizen to do?

First, enjoy the frost if you have any.

Second, think about what drives the current renunciation of science in American politics.  Our American mythos is based on an assumption that market freedom as synonymous with personal freedom.  That’s one of those gaps between our ideals and factual reality.  The market has no place for good things we share in common—for roads, for sewers, for the air we breathe, for the climate of the earth.  President Reagan’s science advisor once said, “There is no energy problem that can’t be solved by the marketplace.”  That political doctrine ignores the shared problems of pollution and limited resources.

The best thing the citizen can do is to examine the facts and avoid being enmeshed in the current  “politics of resentment.”**

——
** Politics of Resentment.  Several studious books bear these words in the title, books that examine cultures of people who feel left out by their political leadership.  Various authors are Katherine Cramer, Philip Resnick, Jeremy Engels, and Hans-Georg Betz.  Although based on one state, Cramer’s work might well apply to the entire U.S.