A system is two or more things acting on each other.  Like a weight bouncing on a spring.  The weight pushes on the spring and the spring pushes back on the weight, with the result that the weight can bounce up and town.  That’s a simple system.  The scientific concept of complex systems arose during the last twenty years as the advances in computers enabled scientists to investigate nonlinear systems.  There goes another word—nonlinear—and life was complicated enough without it.  Well, complex, when applied to systems, doesn’t simply mean complicated, although complex systems usually are. Let’s break it down into simple parts.

And what’s nonlinear,  other than a wierdo? 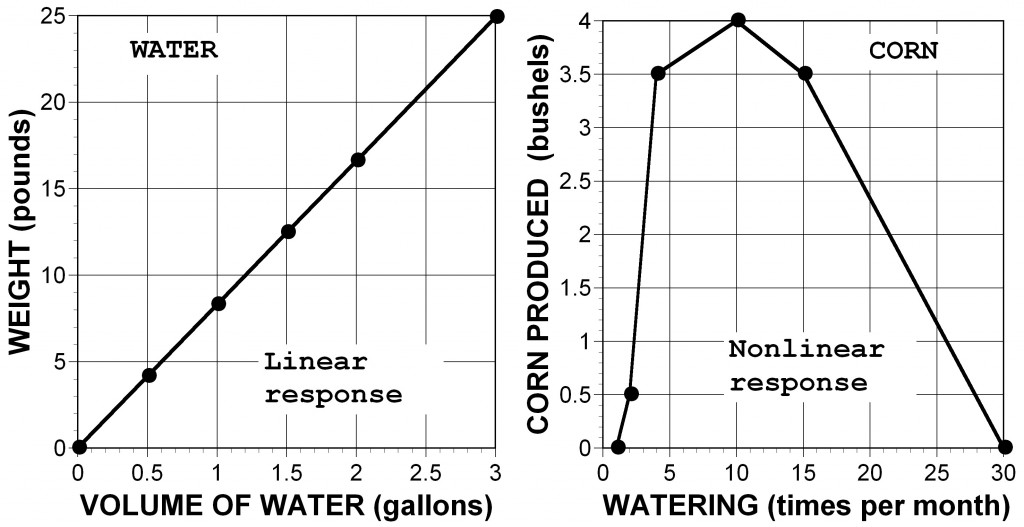 Let’s suppose you test the growing of corn on a set of small gardens in a dry climate. In the first garden, you plant corn and you water it once per month. Nothing grows. You water four other gardens twice a month, weekly, every three days, and daily.  Those gardens produce half a bushel, 3.5 bushels, four bushels, and 3.5 bushels.  Finally, you water the last garden every day and find its corn plants all die in the mud.  The corn produced is not proportional to the water applied. This is a nonlinear response.

Complex.*   Now we’re ready to think about complex systems.  A complex system is composed of many actors (technically called agents), which interact by nonlinear rules.  The corn had one actor—each corn plant behaved without regard to what the other plants were doing.   But that’s not true for a school of thousands of fish, in which each fish attempts to maintain approximately a particular separation from other fish, and to swim in approximately the same direction.  The result is a cloud of fish that moves coherently as one body, changing shape and direction as it moves.  A synchronous dance appears, an emergent behavior that could not be foreseen from the simple nonlinear rules of separation and direction of travel.  That’s a characteristic of complex systems—an emergent behavior of the whole system without a command from a central control.  That’s how termites build a nest, how starlings swarm.  There, you have it.  You understand complex systems.

Did you ever think of automobile traffic as a complex system?  Each independent individual driver attempts to maintain his idea of a safe separation from other vehicles, depending on his speed (a nonlinear rule).  Each driver changes speed in some nonlinear way, depending on the separation.  If the spacing is close enough, a minor perturbation (the sight of a car parked off the road or a car weaving across lanes) causes one or two drivers to reduce speed, setting off a collective behavior, compressing traffic like a shock wave.   It’s ironic that a traffic jam occurs behind the idiot driver who initiated the whole thing by weaving back and forth between lanes while passing everyone else!  This illustrates how a complex system can have a memory; a coherent effect may emerge long after the causative event occurs.

The next time you’re caught in a slow-moving traffic jam with no visible cause, remember that you are an actor with nonlinear rules in a complex system.  Don’t explode with anger.  That would be even more nonlinear.

We’ll talk more about complex systems in the next blog.

*  Chaos is different from complexity.  Chaos is seemingly random behavior with sensitive dependence on initial conditions—the starting point.  Although complex systems often operate in a nearly chaotic fashion like ants milling around, chaos does not require a system of many actors.  One actor may be chaotic all by himself.  Think of someone you know.